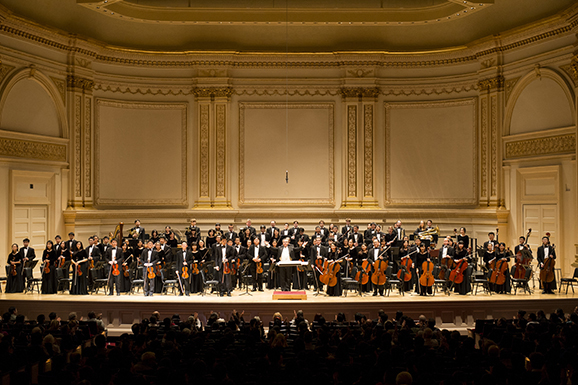 The inestimable Stern Auditorium / Perelman Stage has seen innumerable historical concerts and events: The very first opening night in 1891, Horowitz’s sold-out 1965 recital, and Groucho Marx’s 1972 appearance at the twilight of his career are but a few. With five curvilinear levels that seat 2,804, Stern / Perelman has acoustics that have dazzled audiences and performers for over a century.

The striking design of the 2,804-seat Stern Auditorium / Perelman Stage reflects both careful planning and remarkable intuition on the part of its architect, William Burnet Tuthill. Tuthill was an amateur cellist and secretary of the Oratorio Society of New York City, but had never before designed a concert hall. To make up for his inexperience, Tuthill extensively studied the science of acoustics as it was known in his day, and with the help of Dankmar Adler, an acoustical specialist, investigated the construction of hundreds of other halls. Based on his findings, Tuthill designed an interior that avoided focal points for sound as it produced an ideal resonating chamber: the interior dome, the high proscenium arch, and all the interior curves were conceived to produce optimum reverberation. Tuthill carefully arranged the boxes and balconies to help break up the even spread of sound, and controlled reverberation with the upholstery of the chairs and the carpeted aisles. The four-foot thick exterior masonry walls, concrete and terra cotta tile construction materials, and interior walls of slow-drying plaster combine to block out exterior sound.

The auditorium’s renowned acoustics have made it a favorite of audiences and performers alike. “It has been said that the hall itself is an instrument,” said the late Isaac Stern. "It takes what you do and makes it larger than life.” An extensive renovation in 1986 removed decades of alterations to Tuthill’s design, returning the auditorium to its original understated 1891 splendor. The hall was dedicated the Isaac Stern Auditorium in 1997, and the stage was dedicated the Ronald O. Perelman Stage in 2006.